For cryptocurrency investors, traders, funds, DeFi users, and insitutions, TCAP is an ERC-20 compatible smart contract that tokenizes real-time Total Market Capitalization from all cryptocurrencies and tokens listed on the most reputable crypto data providers in the world.

Combining blockchain technology with the process of data aggregation, over $1 trillion of raw market capitalization data can be brought to market via crosscollateralized, asset nominal tokenization. Asset nominal tokenization starts with the process of taking a data metric, such as Total Market Capitalization. This metric is then set to a divisor of 10,000,000,000. The new, nominal asset token value now trades in lockstep with the underlying data metric it tracks.

Collateralizing the new smart contract against multiple assets like ETH or DAI provides the security that this new tokenized asset is backed by a set of rules and collateral enforced by an Ethereum smart contract, thereby tokenizing total market capitalization.

For example, if the total crypto market cap resides at 350 billion dollars. We then add a divisor to that number, just like the S&P 500 or any major financial index would. The price calculation for TCAP is as follows:

Where c is the total cryptocurrency market cap, d is the divisor and r is the TCAP token price.

TCAPs are then minted upon being collateralized by an underlying asset, such as ETH or DAI. What the user receives in return is a newly minted asset nominalized token that moves in real time to the penny of the underlying total market cap metric our TCAP Smart Contract is tracking. Each TCAP is algorithmically collateralized by a corresponding amount of ETH or DAI needed to appropriately back each token by 150%, thus creating price exposure to the entire cryptocurrency sector with the single push of a button.

TCAP architecture has the following components: 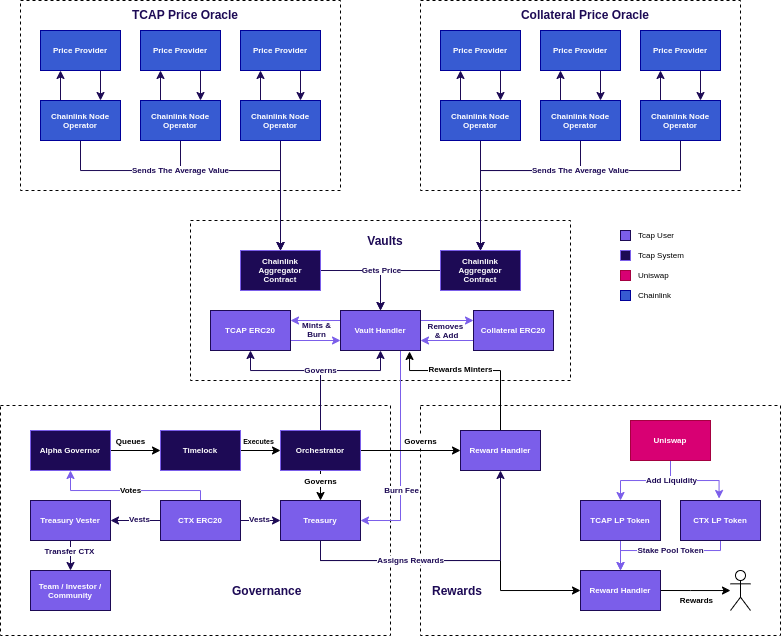 ERC-20 Token in charge of the Governance of the Protocol. Owners of the CTX Token are able to make proposals and vote to make protocol changes. Read more details on the CTX Reference.

This contract is in charge of managing proposals and actions, CTX holders call it to vote or create new proposals with actions that will be queued into the Timelock if the voting is successful. Read more details on the Governor Alpha Reference

The Timelock contract can modify system parameters, logic, and contracts in a 'time-delayed, opt-out' upgrade pattern. Read more details on the Timelock Reference

Contract that handles the finances of the Protocol.

The Vault handler is in charge of managing user vaults. Vaults allow users to stake a collateral to mint new TCAP Tokens. Only one vault per address can be generated in a Vault Handler. Each Vault Handler is connected to a TCAP Token, three Chainlink Oracle (TCAP Oracle, Collateral Oracle and an ETH Price Oracle) a Treasury Contract and a CTX Reward Distributor. Parameters are handled by the Orchestrator. Read more details on the Vault Handler Contract.

The TCAP Token is an ERC20 compliant contract which can only be minted and burned by a Vault Handler. It behaves like a normal ERC20 Token with a cap parameter handled by the Orchestrator. Read more details on the TCAP Token Contract.

The Reward Handler is in charge of the initial distribution of CTX for the first week of the Protocol launch, this early distribution will help bootstrap the governance to the community using the Cryptex Protocol. Read more details on Reward Handler Contract.

The Reward Handler is in charge of handling CTX rewards for liquidity providers on the Sushiswap Protocol, rewards will help decentralize CTX as well as promoto liquidity of the TCAP token. Read more details on Reward Handler Contract.